Spatial audio aims to place you at the center of a three-dimensional listening experience. Done right, it goes beyond regular stereo audio, surrounding you with sound and fully immersing the listener. With many real-world music venues closed down due to COVID, it is a great way to make you feel like you’re out of your living room and getting a taste of the real thing.
As a video content provider, offering a spatial audio experience for your customers can give you that extra push of immersion that will set you apart from your competitors. In this article, we’ll look at three of the biggest players in spatial audio and see what they bring to the table. If you want to know which vision matches yours most closely, this guide will show you.

What Is Spatial Audio?

Stereo audio involves separating sound into two separate channels. This can be done by recording with two microphones, or by artificially varying audio properties over each channel. This is used in the common, two-speaker setups most people have to add direction and depth to sound.
Spatial audio goes further than this. As well as using additional speakers, it includes height information, enabling sound to come from above or below you. It also enables objects in the audio to come from specific positions, like the top left corner or directly behind you.
When applied to music, cinema, and games it can take realism to a whole new level. There are several competing versions of the technology, each vying for the attention of creators and users alike. Dolby Atmos, Sony 360 Reality Audio, and Apple Spatial Audio are the major players and have their own pros and cons.

Dolby Atmos is the venerable granddaddy of the spatial audio scene. Since launching in 2012 it has become very well established, and there is no shortage of Atmos content available across multiple platforms and streaming services.  99% of global consumers can access a service with Dolby Vision and Dolby Atmos content.
Its object-based audio means each element in the soundtrack can be given a location and direction. A speaker setup can recreate that, so it sounds as if everything comes from a specific place. It also features height virtualization. This uses filters to simulate audio cues that the ear uses to differentiate between sounds coming from different heights. With 128 tracks there’s the potential for some extremely in-depth soundscapes.
Over 6000 cinemas already use the technology, and it is used in many films, music content as well as sports events.
With such widespread support, you can experience Dolby Atmos via Blu-ray disc, 7 of the top 10 streaming services including Netflix, Disney+, Apple TV+ and HBO Max, music streaming services including Apple Music, Amazon, and Tidal, and live sports events with SKY UK, BT Sports, and Comcast. Not every service works with it on every device, so be sure to do your research when setting it up. However, it’s gradually becoming more accessible to more streaming services, as back-end video solutions such as Bitmovin’s encoding, make it easier to build Dolby Atmos-supported workflows.
Cinema-based Atmos setups make use of large numbers of speakers, including many embedded in the walls and ceiling. At home, you don’t need to go that far, with two to four ceiling speakers helping you get plenty out of the system.  Even easier setup can be found with the latest soundbar systems, which aim the sound upward to reflect off of the ceiling, making the setup literally plug and play.


Plenty of TVs and other equipment already work with Dolby Atmos, making it a great choice for newcomers to spatial audio. Even those of us with regular headphones can join the party. The immersive experience and wide availability make it worth it.

Dolby Atmos is a well-established format, and it’s easy to find hardware and content that works with it. It offers rich, directional sound in a variety of settings.
Pros

Sony 360 Reality Audio is a new technology that delivers an amazing listening experience through headphones. It aims to sound as good as speakers, with audio coming from multiple directions. It allows you to control the location of all audio elements over 64 speaker channels. It uses the MPEG-H 3D audio standard, and Sony has worked with the Fraunhofer IIS to make the format accessible to creatives.
Its technological secret sauce is “binaural rendering”, which works by varying sounds in the same ways your brain uses to work out where a sound source comes from. Sounds can reach your ears at different times and are also altered by the shape of your head and ears. Several streaming services currently support the format. You can listen to it on Tidal, Deezer, and Nugs. Amazon Music HD also works with it, but you’ll need the right speaker set up.
The format is also compatible with video streaming. There’s little support for it now, but more is on the way.
It doesn’t need much specialized hardware, just high-definition compatible headphones. It uses an app that lets you scan your ear shape and send the results to streaming services, for a uniquely personalized experience. You can also use it with the Amazon Echo Studio speaker. Several major artists are producing music with the format such as Tony Visconti and Pharell Williams, and there are already over 1000 songs available to listen to.
For those interested in getting into it themselves, Sony has a licensing program that includes mixing software. There’s also a recommended infrastructure to help get your studio working with it. The future looks bright for Reality Audio with comments in Android’s Open Source Project suggesting it could arrive on Android soon, and be adapted so it works on any speakers or headphones. Definitely, one to keep an eye on.

Reality Audio uses a range of exciting technologies to make directional sound feel as immersive as possible. Sony offers plenty of help to creatives who want to work with it.
Pros
* Excellent choice for headphone users.
* Dedicated software and support for studios.
Cons
* Relatively limited catalogue.

Apple Spatial Audio lets you use existing sound formats with AirPods to give you immersive audio. It works by using filters to make sounds seem to come from any direction, including above or behind you. It can be applied to 5.1, 7.1, or Dolby Atmos sources. That means it doesn’t need a dedicated audio format, unlike the other technologies described here. Its killer feature is tracking. Not only can it track your head position, but it also detects where your device is. That lets it dynamically adjust the filters to make it sound like your audio is coming from the right direction, even over headphones. 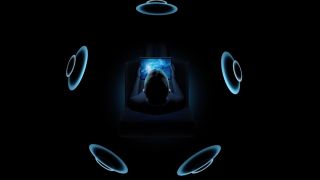 It takes advantage of gyroscopes embedded in the AirPods to figure out where you are moving and adjusts the sound direction accordingly. That means you can turn your head towards a sound coming to the side of you, and it will then seem to be in front of you. As well as multi-directional sound, it also keeps sounds distinct, making dialogue easier to hear in movies. It’s available for free, as long as you have the right hardware. That means at least iOS 14 and a more recent apple device, such as the iPhone 7. You’ll also need AirPods pro or max.
Apple Spatial Audio isn’t yet supported on Apple TV devices, despite rumours the new 2021 Apple TV 4k would be compatible. Software support comes from HBO Go, Hulu, Vudu, and Amazon Prime Video, which all use formats that work with it. You can also use plugins to use spatial audio with stereo sources. Netflix support is rumoured to be on the way, too.
If you want to check if spatial audio is working on your device, look for a blue animated icon in the settings. You can find it by touching and holding the volume icon in the control center.

If you want to reach Apple fans with the latest devices, Spatial Audio is a great choice, delivering an outstanding experience across a broad range of media.
Pros
* Head tracking is a hugely impressive feature.
* Works with existing formats.
Cons
* Tied to specific Apple hardware.

Spatial audio can take your streaming content to the next level. Your audience will be immersed in sound, and the experience will be much better. If you want to give your work an edge over the competition, spatial audio has the next-gen factor to help you do that.
As you’ve learned here, there are multiple versions of the technology, which can be deployed through a range of channels. Using it isn’t as hard as you think.
If you want to learn more about spatial audio, and how you can use it to wow your audience, get in touch with Bitmovin. They specialize in audio and video codecs and can show you how to get the most out of them, delivering quality content while using bandwidth as efficiently as possible. That keeps your costs down too, meaning you can stay more competitive while delivering your content in new and exciting ways.

Uncertain if he's a coder who writes or a writer who codes, James tries to funnel as much of this existential tension as possible into both of his passions but finds it of more benefit to his writing than his software.