This tutorial describes the various objects that make up a Bitmovin encoding, how they interrelate, and how they are created and manipulated through the APIs and SDKs. It will help you understand the necessary foundations to become an efficient Bitmovin video developer.

In the next few sections, we will go through a high level overview of the fundamental objects that model an encoding workflow.

But first, let's quickly talk about the relationship between these objects and the APIs that you use to instantiate them. The Bitmovin solution at its core is a platform that exposes an HTTP-based REST API for interaction with other systems, in particular your own. A number of endpoints are provided to create, retrieve and delete configuration objects and trigger the workflows. The objects manipulated by each endpoint follow models that are defined in a specification(*1). Most of the time, you will use one of our SDKs to interact with the platform. The role of the SDKs is fundamentally to allow you to work with the model, instead of having to work with the REST API directly. Their main tasks is to call the APIs for you, and in doing so to translate your objects into the appropriate JSON payloads sent in the HTTP requests, and translating the JSON responses back into those objects. Code completion and type checking are some of the advantages of this approach, all allowed by the strict modelisation of the solution.

When you browse the API reference, you are presented with the models associated with each endpoint. Click the Model hyperlink to see them.

Tip: you'll often find that the payload for the "create" (POST) request for any particular endpoint provides the clearest representation of one of the fundamental models associated with that endpoint. Indeed, the "list" and "get" (GET) requests often return multiple objects and additional request-level information in their responses and therefore get wrapped into other models.

Some of the objects used (actually many of them) do not have endpoints dedicated to them. They are just "internal" models that are combined into more complex ones managed through these endpoints.

To try and make the text below clear and provide some disambiguation of often used terms, we will adopt the following notation:

Finally, we use singular or plural form interchangeably in the text below, for clarity of the expression, but both forms refer to the same object, ie. Input == Inputs

There are a number of objects that you will use every single time you work on an encoding workflow. They are the following: 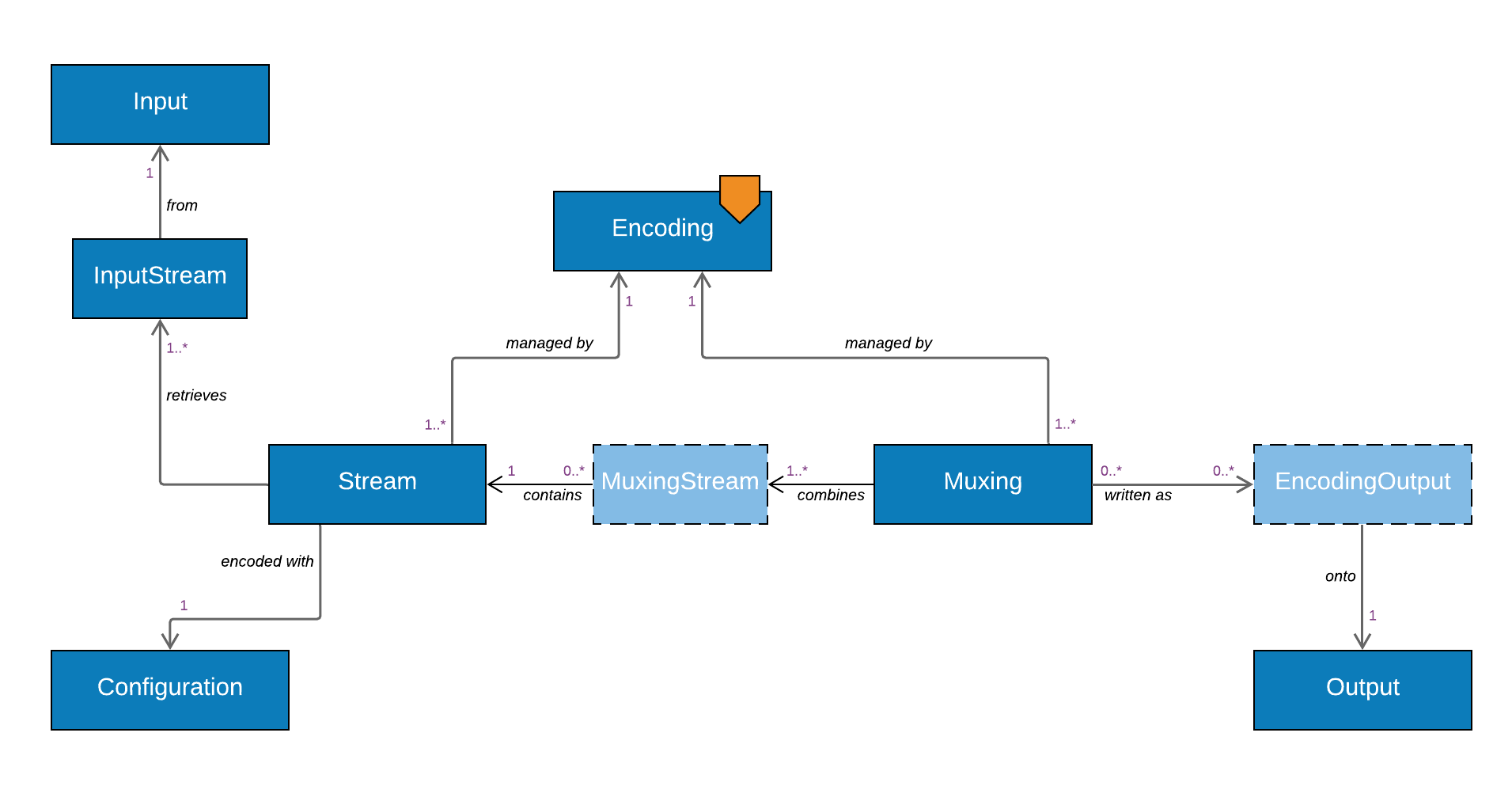 In this diagram, boxes with solid border represent objects associated with API endpoints, dotted boxes are the "internal" models. Arrows represent the direction of dependencies. Orange markers are added to the objects whose endpoints have web methods used to trigger the associated generation workflows

We now have all the fundamentals pieces in place that chain together. Let's summarize it:

An Encoding represents a workflow allowing the Bitmovin encoder to grab one or more InputStreams from Input services, encode them with codec Configurations into Streams, multiplex them into Muxings and output them onto Output services in locations defined by EncodingOutputs

Everyone's favourite topic and the object of primal fears among video developers... At least the modelling of it is quite simple: A Drm^ object contains all the information required to configure the encryption of a Muxing. It has different implementations for different DRM methodologies such as CencDrm, FairplayDrm, ClearKeyDrm, etc.

The Drm object also links to Output services (via EncodingOutput objects), to represent the encrypted version of the files or livestreams to be generated. One of the great advantages of this model is that since the Muxing can now be written both as an unencrypted version (through its own link with an Output) and as an encrypted one (via the Drm object). Perfect if you want to send the DRM'ed content to your origin service, and the clear one to long-term storage!

When considering adaptive bitrate (ABR) streaming, there is another concept to add to the previous ones. There is a component in the Bitmovin solution that is distinct (but closely related) to the encoder: the manifest service. It is in charge of writing the manifest files that associate multiple generated files and streams into payloads that an ABR player can consume and stream.

Numerous new objects are used to model ABR formats, worth a dedicated tutorial, but one in particular needs highlighting here:

The Manifest^ object is used to represent those, through implementations such as HlsManifest, DashManifest and SmoothStreamingManifest. It has the following relationships:

At Bitmovin, we are proud to have engineered an encoding solution that works very much the same way, whether used in one of our managed clouds (whether on Amazon AWS, Google GCP or Azure), on our customers' own clouds, or even on on-premise infrastructure. The object model reflects that, by allowing an Encoding object to be linked with infrastructure objects such as KubernetesCluster or AwsAccount to simply control where a particular encoding will be performed.

There are loads of other objects that can be used to create more complex encoding configurations. Some of the ones worth highlighting: 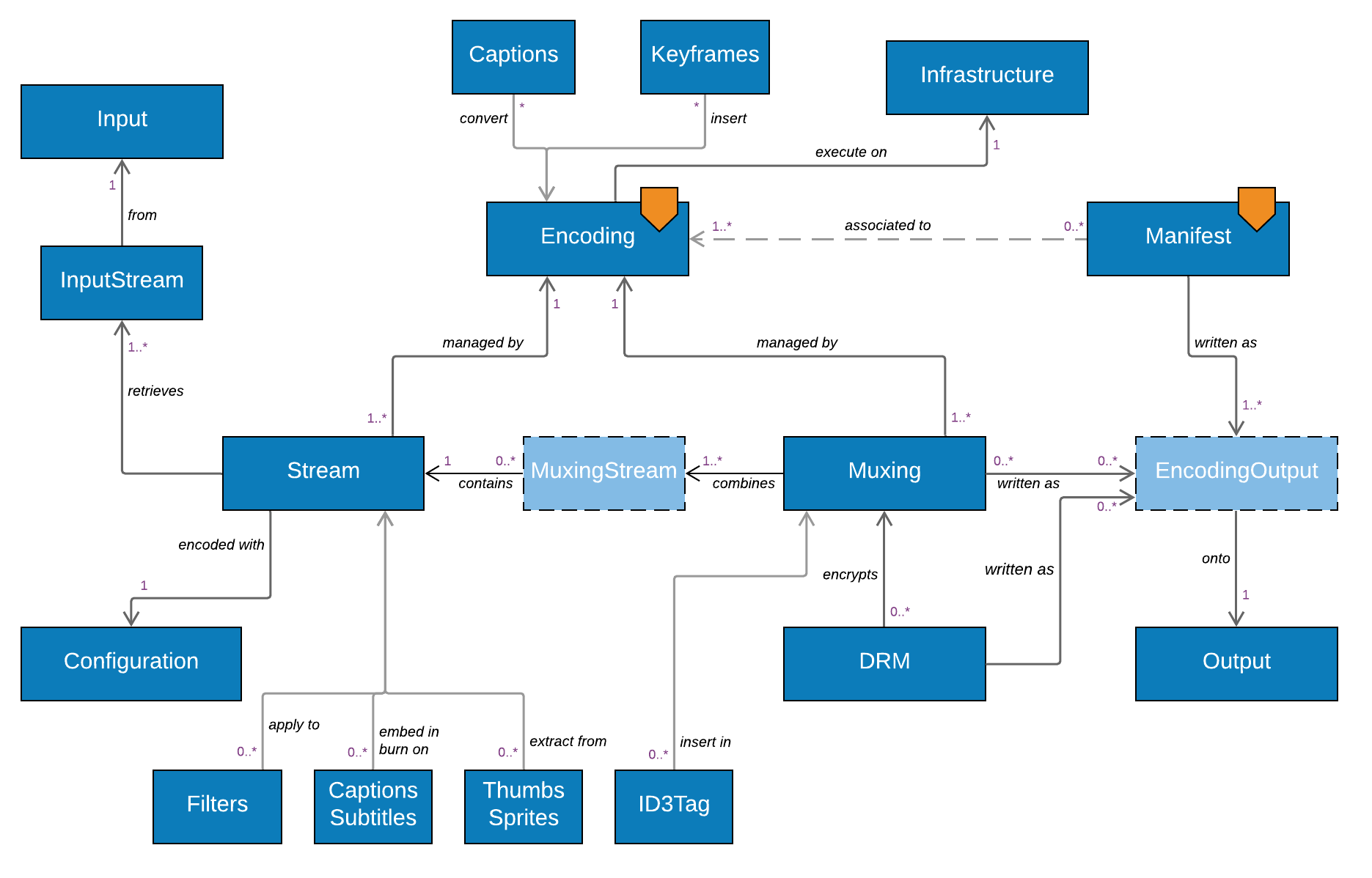 (*1) - We use the OpenAPI 3.0 standard to define our API spec. It offers many advantages, including the ability to generate SDKs automatically!

(*2) - It is worth stopping for a minute on this word: "stream". It has the potential to be very ambiguous, as it is used extensively both by developers and video engineers to mean more than one thing. Here are some of them that you should know and be able to differentiate. The context will help you differentiate between them.