This tutorial illustrates the different ways to handle multi-channel audio, specifically for when you have multiple source files, different audio layouts, and a need to transform your inputs into streamable audio streams.

First, we go through terminology, and some simple use cases, to introduce the main concepts and API resources that are involved in the encoding configuration when it comes to audio.

Then, we look at use cases that involve channel (re-)mixing from an input stream to an output stream.

Following that, we look at how to (re-)map multiple streams between inputs and outputs.

Finally, in the last section, we put it all together and look at how to merge multiple multi-channel streams into a single output stream.

But first, it helps to understand what we are talking about and agree on the vocabulary.

For this tutorial, we will use illustrations such as the following to help depict the concepts: 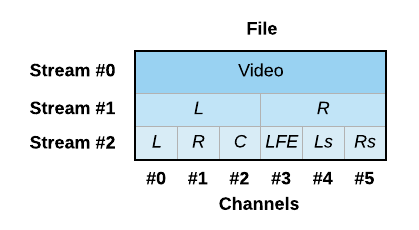 This represents a single file, with 3 streams.

In the simplest case, there is no real audio manipulation taking place. You have an input with an audio stream with a particular channel layout, and you want basically the same to be in your output, with the appropriate codec and bitrate. This use case is our baseline, which we’ll need to introduce additional concepts for the next, more complex use cases. Note that we do not currently support a passthrough options in most cases; an input audio stream still needs to be encoded in order to be properly aligned to the encoded video content, especially when creating segmented content.

Let’s take the following example, with a single stereo stream:

We will not go into all aspects of the encoding configuration (there are other tutorials on our website that cover that), but will look specifically at the audio aspect of the configuration. For that, you will need a similar set of resources as for other streams:

Note: For the purpose of this tutorial and in the example code files associated with it, we will always generate a single MP4 file as output, with all audio streams multiplexed with the video stream. In most situations that involve adaptive bitrate streaming with manifests such as HLS and DASH, each stream will have its own separate muxing.

As you can see from this snippet of code, there was no need to handle any aspect of the channel mapping between the input and output for this simple use case. StreamSelectionMode.AUTO (which is the default mode so does not even need to be specified) tells the encoder to do its best at finding an audio stream in the source that makes sense to use as input stream.

Note: if you have previously configured encodings without an IngestInputStream and instead referred to the input file directly in the Stream's creation payload, read this FAQ to understand why we recommend that you switch to the first method.*

A full code sample can be found at AudioChannelManipulation_1_Baseline.java

A situation that occurs regularly is one in which each input stream comes in a distinct file. In particular, this is what you will have if you are receiving IMF packages from your content provider, since they store each track in a separate “essence” (hear: file).

Bitmovin also allows you to work with streams that are in separate files, whether or not the files also contain a video stream.

This is handled in much the same way as in the previous example, but now you need to have multiple IngestInputStreams, CodecConfigurations and Streams. If we refactor the code to have functions for creation of each of the resources above, the code might therefore look like the following:

A full code sample can be found at AudioChannelManipulation_2_MultipleInputFiles.java

In this section, we look at use cases that require manipulation of the audio channels present in the input audio stream.

As before, let’s imagine that your input file has a stereo audio stream, but that somehow, the left and right channels have been reversed. It’s more of theoretical use case (or you should have a serious word with your content provider), but it helps us illustrate in a simple way the next concept: Audio Mixing 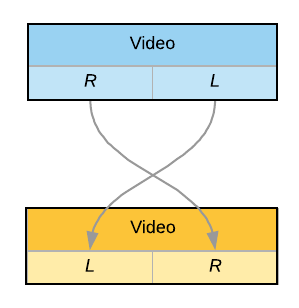 With Audio Mixing, you can go down to the level of the channel (instead of simply the stream), and manipulate the channel layout.

Just as before, you will need an IngestInputStream to point to the source file. But in addition, you now also need to involve an AudioMixInputStream to apply a transformation to that input stream, before generating your output Stream.

The transformation here is simple: take each channel (by position in the input stream) and re-map it to the opposite output channel.

Let’s highlight a couple of important points from that snippet of code:

You can find a full code sample in AudioChannelManipulation_3_ChannelSwapping.java

Another similar use case is if one of your logical source channels is hard “panned” to either the left or right channel of an input stereo pair, leaving the other channel empty. You can then simply select it and copy it to both output channels to center it.

Let’s look now at a more complex use case, which involves multiple source channels being combined into the same output channels. 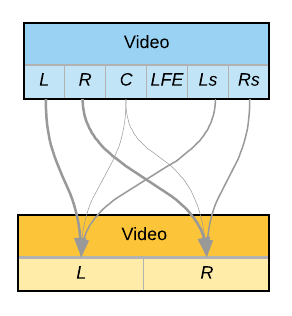 Caveat: Note that we are not claiming that this is the right or only way of downmixing 5.1 to 2.0. You will need to discuss the correct mechanism with your content provider. The example above is only for the purpose of illustrating the advanced concepts of audio mixing.

Enter the concept of gain. This property allows us to define at what level (volume) one of the source channels should be combined with others.

Code-wise, this looks fairly similar to the previous use case, but (naturally) with more configuration. Let’s look at just the left channel’s mixing definition:

Notice also another difference with the previous use case: instead of defining source channels by their position in the stream, we choose them by channel type. If your input file has been correctly tagged, this simplifies the code and also ensures that you can handle input files that may have slightly different channel layouts (since there are multiple ways of laying out 5.1 channels in a stream in the industry)

You can find a full code sample in AudioChannelManipulation_4_Downmixing.java, which streamlines the example above by using functions and helper classes to improve readability.

What about the AudioMix Filter?

You may have seen in our API documentation that we also support a filter for audio mixing. It is functionally equivalent to the AudioMixInputStream when it comes to audio mixing configurations and use cases and was our initial approach to provide this feature. AudioMixInputStreams are the successor of it, so it is highly recommended to use these instead of the AudiomixFilter going forward. In particular, if you are also intending to use other functionality enabled through InputStreams resources, such as trimming and concatenation, you will only be able to define the audio manipulation through an AudioMixInputStream in the chain of InputStreams.

In the previous section, we looked at how to (re-)mix audio channels in the audio input stream. In this third part, we now look at use cases that have a different number of audio streams between the input and output, and where multiple audio streams need to be combined with each other to generate an output stream.

It is a very frequent use case, particular in broadcast workflows. The source file has multiple (often PCM) streams/tracks, each with a single mono channel that represents one of the output channels. Let’s take a middle-of-the-road example here, with 8 mono streams that contain the channels for a stereo pair and a surround audio layout. 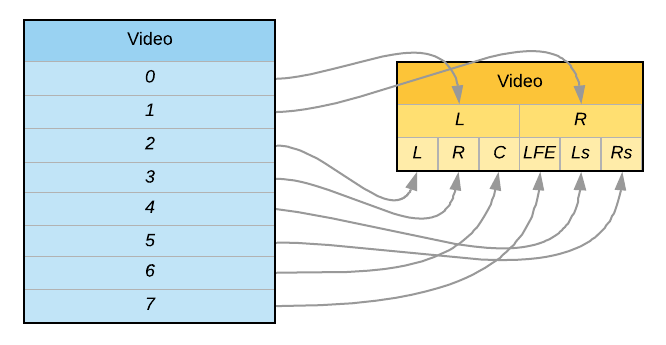 We have so far met all the resources and concepts necessary to configure an encoding for this use case, but this example allows us to revisit a couple of points highlighted earlier in the tutorial.

In use cases 3 and 4, we had a single IngestInputStream to select the single audio stream from the stream, which could be used in all aspects of the configuration thereafter. As shown in use case 1, we could also use the automatic StreamSelectionMode to let the encoder implicitly select that audio input stream in the source file.

We now will have to be more explicit, and select exactly the right audio stream as input stream for our configuration, and map it appropriately in the AudioMixInputStream configuration to the relevant output channel.

Tip: to determine how many streams your input file has, in what order, and with what audio layout, use mediainfo or ffprobe*

You can find a full code sample in AudioChannelManipulation_5_MultipleInputMonoTracks.java, which streamlines the example above by using functions and helper classes to improve code readability.

Although this use case is not frequent, it is just a special case of the previous example, and can be handled in the exact same way. The only difference is that the input file path may now be different for different IngestInputStreams, instead of (or in addition to) the source channel number. 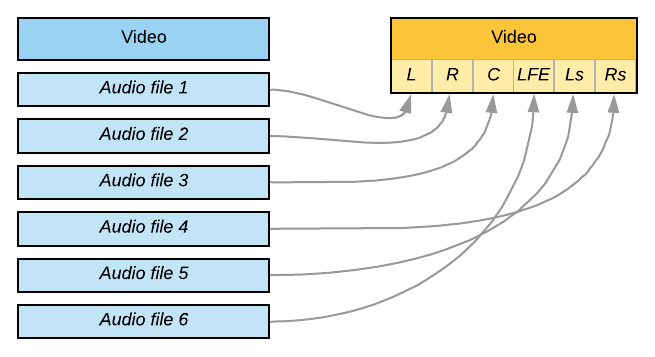 With the same mechanism, you can also now hopefully see how you could replace a single channel in a multi-channel stream with one from a different file. We will not even ask why you would want to do such a thing…

In the previous section, we saw how we can map channels from distinct input streams onto output channels. In this fourth, we will see how we can go one step further and use all the concepts seen so far together, and merge multiple input streams into output streams.

Use Case 7 - Voice-Over or Background Music

In this use case, let’s imagine that we have a source file which contains a stereo audio track, but that in a separate file, we have another stereo track that has a voice-over, such as a commentary. Another similar but reverse use case would be if we had a music track to add as background music to a main audio track.

The do this, we need one final tool at our disposal: the ability to merge streams with similar audio layouts. This can be achieved very simply by providing a list of InputStreams when creating a Stream.

To make this example a little more advanced, and to show how all feature can be combined, let’s also reduce the volume on the original track, so that the voice-over can be heard clearly. We cannot do this when we merge the 2 streams, but we can use the audio mixing functionality shown earlier to create a new input stream with lower gain on all channels:

You can find a full code sample in AudioChannelManipulation_6_MergingMultipleStreams.java, which shows a slightly different use case, in which the same source file contains 2 stereo streams, instead of them coming from different files.

To conclude, let’s summarise the concepts involved and how they translate into the Bitmovin API:

Tip: Remember also that if you want your encoding workflow to be able to cater for inputs with different audio layouts (for example if you receive some files with 1 stream with 6 channels, and some with 6 mono streams), you could use Stream Conditions to apply the correct logic